I don't like doing timesheets. Though designers are rarely known for their organisational skills, we're expected to compile a methodical record throughout the day of each project we are working on. I generally refuse to do this. Partly because there would be far too many unaccountable hours to explain and partly because if I wanted to 'clock in, clock off', I'd work in a factory. Probably making garage-door remotes or something. Even then, I doubt I'd be expected to write, 'Made a garage-door remote.' after making each garage-door remote.

Also, I received a bit of flack recently after posting a series of formal complaints. Apparently, I was picking on Simon for no other reason than to be tormentive. While I'm happy to be labeled such, and have been labeled worse, there are many other reasons to pick on Simon. Here are just three:

1. Simon glued his calculator to his desk to stop people borrowing it. Its position at the back of the desk and the angle of the LCD screen requires that he stand to use it.

3. I once asked Simon what three items he would rescue from a house fire and he replied, "My cat, the home insurance policy, and my Invicta watch collection."

Did you use my desk while I was away last week? You're not allowed to go on my computer. I can tell someone used it because I shut it down before I left and pulled out the power cord but it was on this morning. And where is my mousepad and what is this shit drawn on my desk?

I need to collect everyones timesheets for last week. Have you done them?

From: David Thorne
Date: Monday 13 February 2012 9.52am
To: Simon Dempsey
Subject: Re: Timesheets

I've decided not to do timesheets anymore. As your new token responsibility as timesheet collector is essentially the office equivalent of placing an OCD child in charge of equally spaced fridge-magnet distribution to keep it occupied while The View is on, this saves you from having to bother with the whole embarrassing process.

Also, while I generally avoid going anywhere near your cubicle of sorrow, lest the lack of atmosphere suck me in and cause my eyes to pop out like in that Arnold Schwarzenegger movie where he is on Mars and his eyes pop out, I was required to access your computer in your absence due to a client's request for files.

I actually missed you while you were away. To counter this, I placed a plank of wood in your chair and wrote ‘Simon’ on it. He said I could use your stuff. 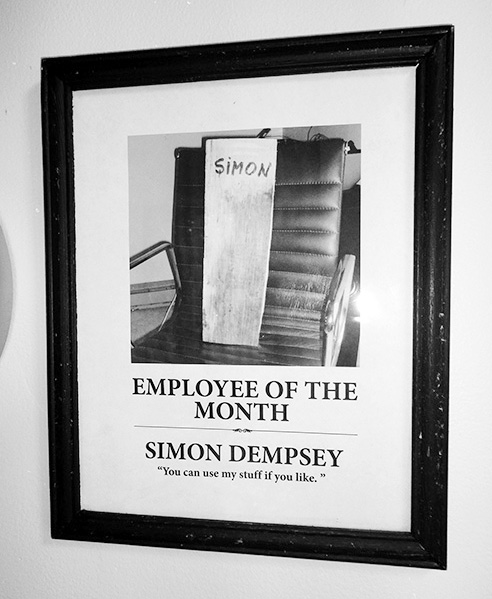 YOURE NOT ALLOWED TO USE MY COMPUTER.

What client needed a file? Youre not allowed to put things on the walls in the foyer either. It leaves holes. It was a waste of time anyway because I took it straight down. Some of us have work to do you know.

You don't just get to choose if you do your timesheets or not. You're not special. It's the rules and accounts need them to bill the client properly. I’ve been here longer than you and I put my timesheets in every week. Everyone has to do them.

1. YOURE NOT ALLOWED NOT TOUCH MY COMPUTER

3. YOU HAVE TO DO YOUR TIMESHEETS. EVERYONE DOES.

I took a photo of my desk and I'm going to email it to Jennifer. Is it permanent marker? And where are my pens dickhead?

Services provided by this agency are charged at a fixed quote and price. As such, time spent doing timesheets might be better spent questioning the logic of requiring timesheets to calculate a fee that has already been agreed upon. Or cleaning your desk.

Being here longer than me doesn't make your adherence to a rule, or the rule itself, right. It makes you the fifth replacement monkey. The one with the weird red arse and the first to point and screech when anyone approaches the stairs. I would be the sixth monkey, at home in bed trying to come up with a viable excuse not to spend another fruitless day locked in a room with five neurotic monkeys.

Regardless, you will be pleased to learn that during your absence, I did do my timesheets. Please find attached.

9am  Arrived at work. Considered staying home in bed but, with Simon away, there's no real reason to avoid the office. Checked production schedule. Completed my work for the week.

10am  Arrived at work. Answered the phone on Simon's desk with, "Hello, this is Simon Dempsey speaking. How may I be of help to you?"

Told client I would have a pdf to them "as quick as a cheetah."

10.30am  Accessed Simon’s computer using his secret password ‘Archmage’ in order to locate and send requested pdf to client. Sent. Read Simon's emails. Replied to his mother regarding her question about what to get Auntie Maureen for her birthday. Recommended a jumping castle.

Changed status to single. Sent Cathy a message saying "Ignore the status change. We haven't broken up, I just don't want anyone to know I have a girlfriend."

Looked at pictures Simon uploaded of himself in a boat. Googled the names of the two guys in Miami Vice. Tagged Simon's nipples 'Sony' and 'Chubbs'.

11am  Arrived at work. Read about Emperor penguins on Wikipedia while having my morning coffee at Simon’s desk. Drew pictures of penguins. 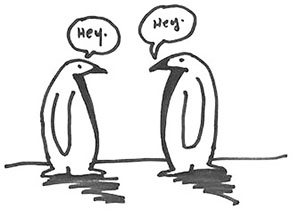 11.30am  Realised the permanent Sharpie I was drawing with had penetrated the paper and Simon’s desk now had several penguins saying 'Hey' on it. Hunting for something to clean it with, I used the key Simon hides behind the framed photo of his cat Lady Diana to unlock his top drawer. Found Star Wars Lego. Recreated the scene from the movie where Vader cuts off Luke's hand, reveals that he is his father, and entreats him to convert to the dark side so they can rule the galaxy as father and son. Lost Luke's hand behind Simon's desk.

12.30pm  Chased and killed a bee in the office with Simon’s mousepad.

12.45pm  Thought about the bee’s family waiting expectantly at home for his return. Gave them names. Imagined Bradley rushing into his mother’s outstretched arms, bewailing, “I miss him so much” and Brenda replying, “I know Bradley, I miss him too.”

Performed ceremony. There was cake. I constructed a small funereal pyre on Simon's desk out of a paperclip, placed Ben's small lifeless body on top, mentioned his selfless determination to provide for his family, and set it alight.

Ben’s body popped like a corn kernel and flew behind the desk. Unsure if he was still alight, I poured coffee down after him. Realising nobody has ever been behind the desk due to its size and position against a rear wall, I also dropped the remains of the cake and the plate down the back to save me having to walk into the kitchen. Accidently knocked Simon's pens down there as well. And his mousepad.

1pm  Sat in Simon's chair without my pants on.

Thanks for the evidence dickhead.

I emailed that to Jennifer and i changed my password. I'm also making a formal complaint.

Stay off my computer or I'll punch you in the throat. I'm serious. Are you going to get my stuff out from behind the desk?

I wish I had the time. Some of us have work to do and timesheets to complete. I have attached today’s should you wish to also email to Jennifer.

9am  Arrived at work. I feel it is important to set a good example for the other staff through promptness.

9.11am  Received a series of rather vicious emails from Simon, which began with accusations, insults, questions and demands, then degraded into actual threats of bodily harm. This was after I told him I had missed him while he was away. I find this unprovoked animosity disappointing and expected more from the employee of the month.

11.30am  Filled out these timesheets as it is part of the job and allows production to bill the client accordingly. I'm finding it difficult to concentrate on job priorities today due to the negative environment Simon has created, so will be leaving at lunch time.

Good. I wont have to look at your ugly head if you leave early. You're the one who will get in trouble dickhead. 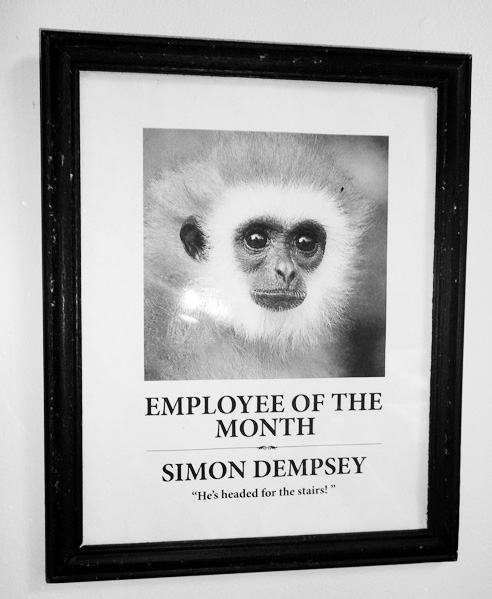