Massanutten is a small resort community in Virginia, US, with a population currently comprising of approximately two thousand old people, their cats, one Australian, his partner, and a dog named Further. The lawns are well manicured and socks are worn pulled up to the knees.

As an Australian, the town of Massanutten is like another planet to me. A heavily wooded planet founded by Norman Rockwell and colonised by John Deere tractor owners with a vision that included waterslides and minigolf.

Along with minigolf, waterslides, old people, and cats, Massanutten apparently has bears. I haven't seen any yet but that is only, I assume, due to most people following rules outlined in section 9 of the MPOA Agreement which states:

"No trash may be put out before Sunday evening. Any trash not in a secured trash container or trash dispersed by animals may be picked up by MPOA employees and owner may be billed for cost. Bear-proof trash cans have been provided at Hopkins Park and the MPOA pool located on Peak Drive for overflow or early check-out trash." 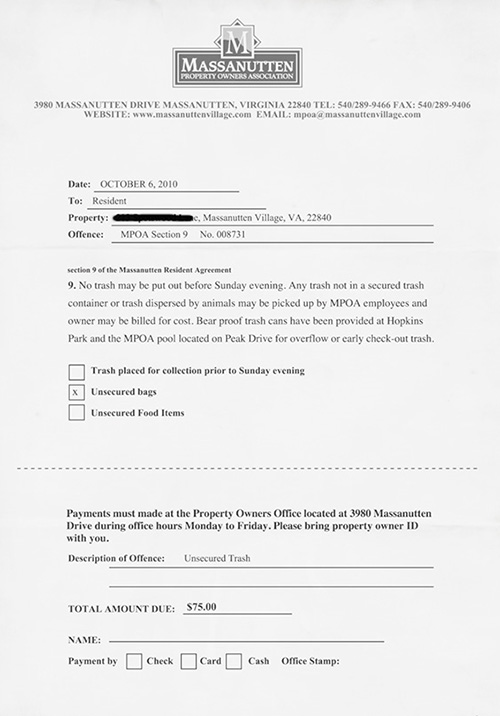 I have received a request for seventy-five of my dollars for putting my trash out for collection without securing it inside a bear-proof container. Due to a series of events the night before, I forgot to put my trash out and had to run it out the next morning after hearing the collection truck approach.

As regulations govern only actions within certain defined limits and thereby justify all similar actions that lie outside those limits, I request that my offence is changed from 'unsecured trash' to 'secured trash barring the possibility of bears formulating a strategy in which to take advantage of the thirty seconds between deposit and collection.'

Section 9 of the MPOA Agreement which you would have signed clearly states that trash must be secured.

The reason we have these rules is so that bears and other large animals are not attracted to the area. This is for everyone’s safety. All bear sightings should be reported immediately to the MPOA. A ladys cat was almost bitten by a bear just a few weeks ago near the mini golf course.

Due to the abundant supply of cats in the area, I'm surprised bears bother with trash at all. As I have run over four cats this week and one of those did not put up much of a chase, it may be suggested that elderly residents and their cats pose more of an attraction for bears than unsecured trash. For the safety of all residents, section 9 of the MPOA Agreement should probably be amended to state that all cats, and their elderly owners, be kept in bear-proof containers.

While walking this evening, I witnessed several cats having some kind of meeting on the sidewalk ahead of me. Possibly to discuss the local bear problem. After reading that a bear recently ate a ladies cat in the area and hearing a twig snap in the woods behind me, I took the shortest route home by cutting through the Massanutten minigolf facility. Managing to scale the three metre fence via fear and a trashcan, I slipped, caught my back pants pocket on one of the pointy metal bars, and hung there for several minutes before managing to wriggle out of them - dropping to the right of hole 7. Fashioning temporary legwear by removing my jumper and placing my legs in the sleeves, figuring they would look like Hammer pants to people driving by, I left the premises by climbing the papier-mâché boulders near hole 16, leaping onto the ticket hut roof, and dropping down the other side to safety. If my shoes had not been wet and slippery from the pond to the right of hole 7, I'm pretty sure I would have made it on the first attempt. While not pointing any blame, I quite liked those pants as they fit really well and cost around seventy-five dollars.

Also, as per your instructions to report bear sightings, I have attached a photograph taken outside my home a few minutes ago. I apologise for the quality but was fearful of getting too close. Please send assistance immediately. 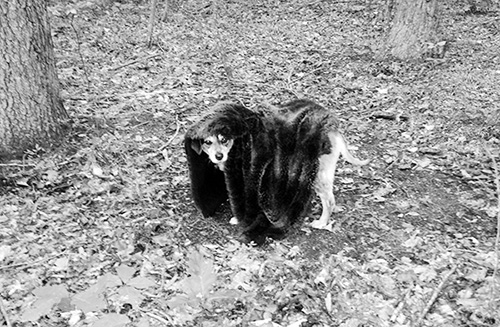 I checked with Carol at the mini golf hut and no pants were found on the fence. I doubt that really happened.

That looks like a dog with a blanket on it. I'm not sending an officer out for that.

If Carol from the minigolf hut has time to check the perimeter for pants, why not send her?

While issuing me a seventy-five dollar fine by justifying it is for the safety of others, you seem pretty quick to dismiss mine. As people rely on your protection from bears and your position consists entirely of not waiving fines issued to ensure the compliance of regulations that protect people from bears, you should probably send out a memo or something stating that we are on our own in an emergency situation. On the back of the memo, you could include instructions on making a pointy stick to protect ourselves with.

Although wary after reading recently that a bear ate a lady and her cat in the area, I decided to risk leaving the premises in order to drive to your office and pay the fine. Unfortunately, possibly due to an unsecured Snickers bar on the dashboard, the bear is now in my vehicle and I am unable to do so. Please send assistance immediately as I have run out of cigarettes and need to drive to the shop. Or, if you send Carol, please ask her to stop on the way and grab me a pack of Marlboro Red.

While you may not class this as an emergency or possible danger to others, you haven't seen me after two hours without nicotine. 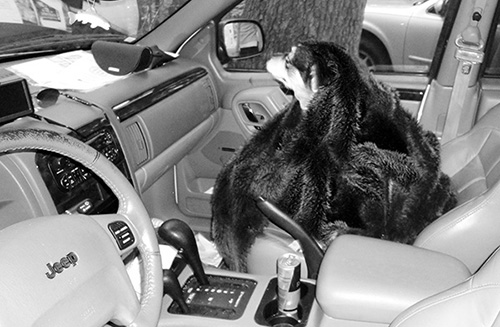 I won’t be sending out an officer because you’re not in danger.

If you wish to express your opinion on trash collection rules you're welcome to attend the next MPOA community meeting which is held each month. Not understanding the importance of bear safety doesnt mean you dont have to follow the rules. I'm not even sure what your point is.

My point is, barring the possibility of strategy formulating bears, stating my actions constitute a punishable breach of regulations structured to protect the community only enables you to be wrong with authority, not right.

Also, while I was able to persuade the bear to exit my vehicle by pretending to be an old lady looking for her cat, it is now inside my premises. Although not immediately evident from the attached photograph, the bear is sitting between myself and the television remote control. As this effectively cuts off my ability to change channels and The View just started, this should be classed as an emergency situation. If I wanted to watch a group of old women carry on, I’d attend an MPOA community meeting.

I'll waive the fine this time if you agree to make sure all your trash is secured in future.

Regardless of whether you waive the fine or not, I will secure my trash. Not because it's a rule, but because it is a logical rule to follow.

Despite my continuing doubt as to the ability of bears to plan and execute manoeuvres requiring SWAT team precision, I will also secure my trash regardless of the time frame between deposit and collection. Not because it's a logical rule to follow, but because it's a rule.

How about you agree to waive the fine and I promise not to email you the remaining eighty-six photos of my dog dressed as a bear.