There's many things to be said for working in the design industry but, as they're mostly negative, especially those regarding clients, I'd rather write about robots. If I were a robot, programmed to serve people all day, I'd throw myself off a cliff. Working in the design industry is a lot like being a robot. A robot that curses its positronic brain for not allowing it to ignore the first law and attach spinning blades to its arms and take out the next human that states "Can you make the text bigger?"

Actually, scratch that, working in the design industry is more like being a whore. The mattress under a bridge kind, not the Julia Roberts type. A whore who has programmed their mind to find, if not a happy place then at least some form of detachment, rather than be outraged by client requests.

There are many things to be said for working in the design industry, but mostly that it's like being a dirty robot whore.

Can you send me the artwork for our business cards you did last year. Finsbury Press has asked for the original files. I need the artwork before Wednesday so either this afternoon or tomorrow is fine.

I no longer work for that agency.

Due to client account management that could be likened to that German dance where men in tights slap each other, the agency went from a thriving business with over forty clients to basically trading while insolvent. As there were very few clients, I spent most of the day playing a game called 'Staring at the wall wondering what happy people are doing' and answering calls by either ending each sentence with 'over' or pretending to be a confused Cantonese woman. Once, I locked my office door and spent the day nude.

In a last ditch effort to retain the few remaining accounts we had, we sent invitations to join us at a charity dinner to provide musical instruments for starving children. The dinner started normally with Thomas, the agency owner, talking about his hair, but by his fifth scotch, the entire table sat in embarrassed silence as Thomas cried while telling a story about how, when he was twelve, his dog Trevor died of testicular cancer. Somewhere between scotch eight and ten, Thomas vomited on the regional manager of McDonald's Australia, and stabbed the marketing manager of Kellogg's with a fork while flamboyantly telling a story about his experience in a Phuket brothel.

I penned my resignation the next day. While some may see this as the proverbial rat deserting a sinking ship, I prefer to think of it as quietly stepping out of a bathtub you have been sharing with four retarded children while they are busy arguing over who lost the soap.

I would suggest contacting the agency and requesting your business card artwork before Thomas swaps the art department computers for magic beans.

Alternatively, if you would like me to recreate and send the files to you, I would be happy to help. I estimate this would take three hours at seventy five dollars per hour.

It's Rob not Bob and I already emailed them and they said they don't have the files and to contact you.

I'm not paying you $225 for artwork that I've already paid for.

You paid the agency to provide artwork and I no longer work for that agency. While generally a frontline supporter of questioning logic, this support wavers drastically in the face of providing free work.

You're seriously pissing me off now. I remember you from the meeting you were the idiot wearing a trucker cap and Atari tshirt.

I remember you from the meeting too, specifically your haggling over pricing and questioning why animated gifs can't be used on business cards.

No, sadly the Atari clad individual would have been Thomas. He believes retro t-shirts and trucker caps disguise the fact he's in his forties. Once you've seen his size 40 lower-half squeezed into size 32 skinny jeans like two parallel overflowing cake icing funnels, it can never be unseen. I would have been the idiot wearing a tie and feigning interest in your business card requirements by appearing to take notes but actually creating an itemised list of things I would rather be doing - starting with #1. Being shot in the neck with an arrow.

The Jumping Frog fee relates to an event early on in my career when I made the mistake of offering a client a fixed price for a two hundred page website. Once the design was signed off and the build completed, the client requested that each page include a frog jumping around the screen. There was no logical reason for this, his wife just liked frogs. Purchasing a frog from the local pet store and filming it jumping from above, I spent the next two weeks masking and incorporating it into every page of the website. A few days later, the client described the addition as "very annoying" and requested it be removed and replaced with a 3D animated frog jumping onto the screen, holding a thumb up, and speaking the words "jump on down and grab a bargain."

After providing a quote for this, I was informed that the amendments would be made "under the original fixed price or no payment would be made at all." The next day, their home page was replaced with a single image of a frog giving the finger and a voice bubble stating "I jump for cash, bitch."

You have until 10am tomorrow morning to send me the business card artwork or you will hear from my lawyer. I am sick to death of dealing with you designers. Being able to draw and dressing like women doesn't make you special.

You've got no idea who you are dealing with.

That may be so but the label "some dick who wants free shit" doesn't require CSI profiling. While I'm no lawyer, I question whether testimony comprising of "I paid an agency to provide me files, I lost the files, I now demand some guy who used to work there give me new files" would have much legal standing, but best of luck with that.

I also question your dissatisfaction with the price I have quoted as I believe the original charge for your work by the agency was around eighteen hundred dollars. While the actual process would have consisted of ten minutes on iStock for the background, two minutes pretending to consider a typeface other than Helvetica, and ten minutes throwing it together, this is standard design industry practice and listed under Direction, Design and Build on the invoice. I do understand your objection to the established system of exchange of money for services though, I personally envision a utopian future where currency is replaced with interpretive dance. We agree on a particular style that seeks to translate particular feelings and emotions into movement and dramatic expression in exchange for groceries or business card artwork. And we all own jetpacks.

Once, in a moment of stupidity, I agreed to design and built a website in exchange for yoga lessons. Contrary to what they would have you believe, you cannot actually embrace the sun as this would result in severe burns and your arms would need to be over one hundred and fifty million miles long. My favourite yoga move is the wriggly snake.

Unfortunately, until I can pay my rent with mantras and emotional intonations through grand eloquent movements, I will require cash.

Fine. Send me the completed business card artwork tonight with an invoice. 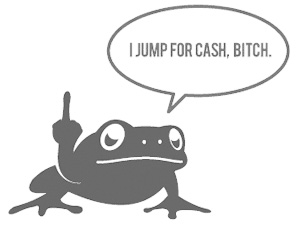